No expense spared when it comes to showing people off Russia just how big and shiny their navy and armed forces are.

However, think back to April and the loss of the Moskva – the flagship warship of the Russian Black Sea Fleet.

An instant hit of Ukraine ministry of defense said; a fire on board according to Russia.

A significant blow to both Russia’s prestige and its Black Sea capabilities. Nor is it the only loss for the Black Sea Fleet, against a Ukrainian navy that has been massively reduced since the annexation of Crimea and largely barricaded in its ports, just like its commercial shipping.

The Black Sea blockade has been a major strategic gain for Russia, forcing Ukraine to mine itself.

Stasis at the ports of Ukraine has left huge parts of the world without grain, most importantly, but also fertilizers, sunflower oil and a number of other exports that have brought much needed money into the Ukrainian economy.

Despite the grain deal that was concluded in Istanbul, no ship has yet sailed. It is an indication of the deep lack of faith in Russia’s intentions, especially after its missile strike on the port of Odesa with the ink on the deal barely dry.

The long touted Tsirkon hypersonic missile will be delivered to Russia’s armed forces in the coming months.

The Admiral Gorshkov frigate, which has already test-fired the missile, will be its first recipient. According to Putin, the Tsirkon missile systems “will have no equal in the world”.

The crowds along Palace Embankment may not have taken it too seriously, but they loved the parade and aerial work. 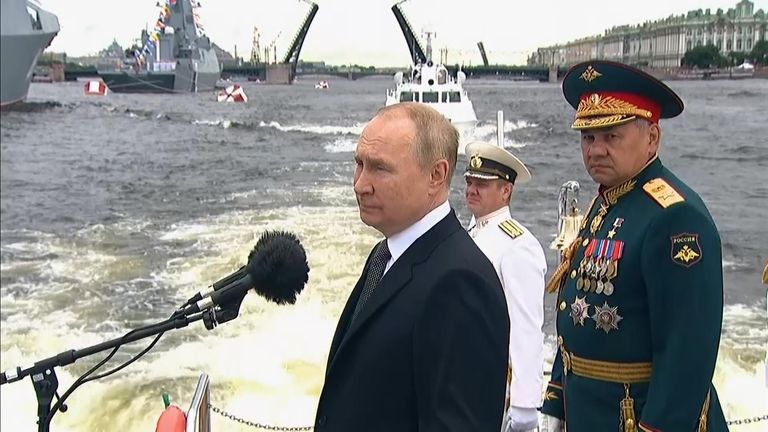 “Did you hear the people cheering when Putin came out?” said Janna, whose distaste for all things British was palpable. “I hope you heard, I don’t think you have such a strong leader.”

“I believe you have pitted us against each other, two brother nations”, she said threateningly, pointing her finger. “I hope you can understand what the Russian spirit is when you are here.”

Natalia in a ‘Z’ T-shirt, merchandise that is seen more and more often, told me that she was sure of the victory. When I asked her what she meant by victory, she said “Victory over fascism, over the Nazis, for peace!”.

“People who are only for their own people, and do not accept others”, is the answer.

That is a broad definition. It’s no wonder it has captured the imagination of so many in Russia. It is a world removed from the concept of death camps and the horrible atrocities of Nazi Germany.

But not everyone is so sure of their president.

“Denazification was fair to Hitler, but there is no Nazism in Ukraine”, says Oleg.

“This war is Putin’s last attack on the world. The personal attack of a mad dictator against the whole world, because the whole civilized world is now against this disgrace that is happening”.

But there may be many more like Oleg who do not attend events like this but who feel deeply uncomfortable with the events of the past five months, their reservations overwhelmed by the powerful force of patriotism that Vladimir Putin so well whipped up.