Rishi Sunak is promising “radical” change if he becomes prime minister, cutting the basic rate of income tax from 20p to 16p before the end of the next parliament.

In his last speech to members of the Conservative Party, he former chancellor claims the 20% cut would be “one of the most far-reaching income tax cuts we’ve seen”.

Mr Sunak said it would be funded by “additional tax revenues generated by anticipated economic growth”, pledging not to increase public debt to cover the costs.

Political center. Truss is winning significant supporters, but Sunak insists it’s all to play for

Speaking to reporters ahead of tonight’s clashes in Exeter, and as party members begin to receive their ballot papers for the final leadership vote, Mr Sunak said: [reduce income tax] responsibly over time, continuing to reduce our borrowing.

“And we’ll do that by growing the economy, taking advantage of our Brexit freedoms and getting our businesses to invest more and innovate more through the tax reforms I’m going to deliver.”

The team of his rival, Foreign Secretary Liz Truss, accused Mr Sunak of “doing another round of tax cuts”. after announcing it would reduce VAT on energy bills last week.

But he defended the plan, saying it was “right that we go further”, adding: “As prime minister, what I would like to do is cut VAT on energy bills to give people a little extra help in the autumn and winter.”

In an earlier statement, Mr Sunak also appeared to hit out at his rival, saying: “There is no more serious choice than the one now facing Conservative members.

“As they approach that decision, I urge them to be wary of any vision that doesn’t involve some difficult trade-off and to remember that if something feels too good to be true, it probably is.”

Rishi Sunak has focused on fighting inflation throughout the competition

Tax has been a major dividing line in the race to become prime minister between Mr Sunak and Ms Truss.

He has outlined £30bn of tax cuts if he takes office, including scrapping a proposed rise in corporation tax and increasing the government’s National Insurance.

Mr Sunak and a number of economists argue that such a move would allow Britain’s current record high inflation to rise further.

But Ms Truss insists her plan will “raise tax revenue by growing the economy”, accusing the former chancellor of policies that “stifle growth by raising taxes” to a 70-year high.

A source in his campaign team said that while Mr Sunak’s tax cuts were “welcome”, it was “a shame he didn’t do it as chancellor when he raised taxes so many times”.

They added: “Unfortunately, it’s a case of ‘jam tomorrow’. People need tax cuts in seven weeks, not seven years. He also chalked it up to growth first, knowing full well that his corporate tax hikes are being scaled back.

“The public and members of the Conservative Party can see these twists and turns.” 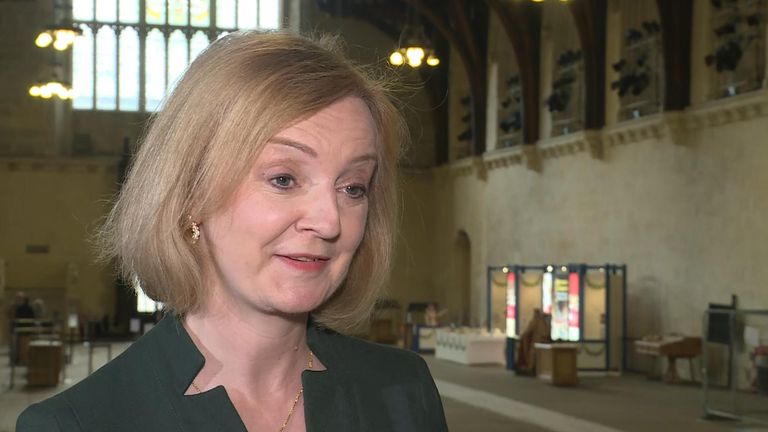 However, one of Mr Sunak’s supporters, Tory MP John Glenn, dismissed the claim, saying the former chancellor was “leading the challenge and also the aspiration”.

He told Sky News. “Where we agree as conservatives across the party is we want to get the tax cuts done as quickly as possible, when they’re available, not when they’re unfunded, they’re going to burden future generations and over time. great uncertainty in the economy.”

Ms Truss’s approach has proved popular with the membership as she leads in the polls, and at the weekend she won support from key party figures including Defense Secretary Ben Wallace and former leadership contender Tom Tugendhat.

And on Sunday night, Chancellor Nadhim Zahavi became the latest to back his campaign, writing in the Daily Telegraph that he would “overturn outdated economic orthodoxy and run our economy in a conservative way”.

But Tim Sunak insists there is still “all to play for” and the race has “just started”, pointing to a Savanta ComRes poll of local Tory councilors showing just a 2% gap between the bottom two.

Another poll of Conservative voters, released today from Ipsos Mori, also boosted his campaign, with 49% believing Mr Sunak would do well as prime minister, compared to 40% for Ms Truss.

But only the membership will decide which candidate gets the number 10 keys.

In her latest policy, Ms Truss promises to “unleash British agriculture to increase our food security”.

During a visit to the south west of England today, he will pledge to remove “burdensome EU regulations and red tape” to help “excellent productivity”.

And he will commit to a short-term extension Govt Seasonal Workers Scheme get the staff farmers and growers need, and work with the industry to address longer-term skills shortages.

“The pandemic and the cost of living crisis have shown that it is more important than ever for us to ensure that we have a high-quality and affordable supply of British food,” Ms Truss said.

“As a former Secretary of State for Environment, Food and Rural Affairs, I understand the challenges facing farmers and they can trust me to deliver the changes they need.”

But a spokesman for Mr Sunak’s team said his announcement “does nothing for farmers and food”.

“He blames Brexit and doesn’t see its potential to help farmers and food production, has no plan to fight inflation, which has hit investment spending hard, and neglects to mention trade deals because of his record in this area.

The pair will continue to clash this week and they will take part in a Sky News debate hosted by Kay Burley on Thursday.

The membership has until September 2nd to vote and the winner will be announced on September 5th.

A new prime minister is expected to replace Boris Johnson the following day.